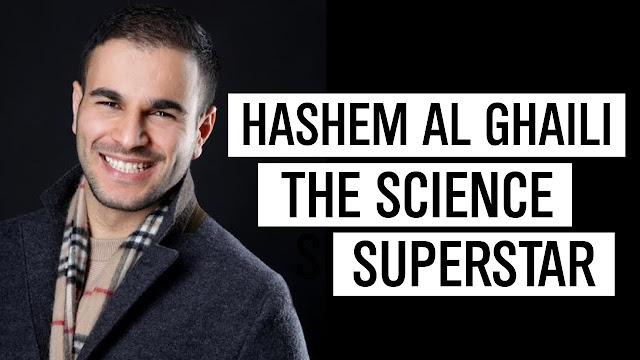 It takes courage and confidence for an eighteen-year-old to resist his parents’ requests to not to apply for scholarship abroad and work on the family farm instead, but the teenager had other plans for his life. He, despite all the resistance, went abroad to get a degree and forged a new path. Today, that teenager is a well-known science communicator and has a Facebook page running with a fan base of 22 Million! If you still haven’t guessed it yet, then here you go; we are talking about none but, the great Science Super star of Facebook Hashem Al-Ghaili.

Hashem Al-Ghaili hails from Yemen. He is a video producer and science communicator. Back from childhood he had immense love for science but sadly for him in Yemen, a child’s fate is decided by his/her parents. It wasn’t easy for Hashim to convince his father that he wasn’t interested in farming, yet his passion lied in Science and h wanted to pursue a career in it.
He chose the hard way and decided to apply for a scholarship. He traveled to the capital, Sana to fill out the paperwork to apply for a scholarship from the Ministry of Education. He didn’t let this father become aware of this act as he recalls,

“If I’d told my father about it he wouldn’t have approved, so I just went.”

The endeavor proved worth the risk. He earned a scholarship for Bachelor of biotechnology at the University of Peshawar in Pakistan from the government. Though it was a move which wasn’t supported at all by his parents!
After graduation, he decided to return to Yemen where he briefly worked in the government’s quality control organization. A few months later he applied for a master’s degree at Jacobs University in Germany. He won the scholarship again and went to Germany. After graduating from there at age 25, he became the vice president of content for the Arabic version of Futurism, (a publication that is centered around the technological and scientific innovation).

A professor of biotechnology at Jacobs University, Roland Benz, who happens to be Al-Ghaili’s supervisor as well, says it was clear from the start working with Al-Ghaili that he was a skilled communicator. According to him,

“He’s able to summarize and present complex data in an excellent manner. When we discuss science it’s on an equal footing. It doesn’t feel like a student and teacher talking.”

"Muneeba Anwar is a Built-In-Geek & Tech Enthusiast who finds solace in reading and writing about latest technologies. She keeps a close eye on happenings in the world of technology and absolutely love to write on tech-related and geeky stuff. You can reach her out at hunain.shah@hotmail.com"
Share with
Facebook Twitter Google+ Pinterest Linkedin Whatsapp
HMS Khalid   ●   7/08/2018 12:56:00 AM   ●   Creative Self Improvement
Video Clips