Next there is the Siachen Gallery, War against terrorism Gallery, Arms Gallery, Nishan-i-Haider Gallery and UN Gallery. There is also a display of three war trophies tanks in the external area of museum. One of the finest offering of the museum is the War Against Terrorism Gallery. This gallery gives a detailed view of efforts made to make world a peaceful place. Besides, the depiction of "The Battle of the Hydaspes" through "Porus Elephant" is definitely going to offer you some nostalgia!

The museum is extremely well organized and maintained. It is, by all standards, a world-class facility. The design, theme, textual details, and artwork is matchless. Every gallery and display are different from each other.  It is a pleasing sight to witness such a world class presentation. Not only this museum highlights a seamless display of Pakistan's 9000-year-old history, yet it also beautifully portrays the history of Pakistan Army and the sacrifices made by its soldiers. It is a must visit for children and adults alike. A visit to the museum definitely boosts ones moral that we haven’t forgotten our roots, our culture, the struggles and sacrifices of our ancestors. 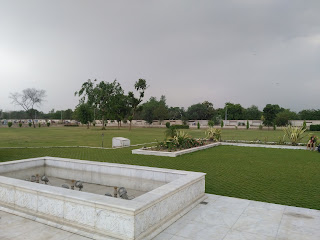 The Army Museum Lahore is indeed a world class museum made by Pakistan Army. It is a fine presentation meeting the international standards. We hope the Army would create such facilities in all major cities of Pakistan in future.