Pakistan just hosted a fully-fledged international kabaddi league and it was AMAZING! Super Kabaddi League (SKL) began on 2nd of May, 2018 in Lahore and came to an end on 10th May. Sponsered by Pakistan Kabaddi Federation (PKF), the league featured around 10 city-based teams. The teams consisted of both 116 nationals as well as 16 foreign players from Iran, Bangladesh, Kenya, Iraq, Malaysia and Sri Lanka.

In Asia, especially Pakistan, Iran, Bangladesh and Iran, kabaddi is considered a popular sport. Pakistan has a rich history in terms of sports as, on many occasions, it has not only participated in Asian games, South Asian games, and Kabaddi World Cup but also has won several medals. Kabaddi’s global popularity has grown considerably over the years with the number of Kabaddi playing nations surpassing forty!

The game is played by two groups of seven, spinning around pretty basic skills. A 'raider' enters the other portion of the court to tag or wrestle opponents before returning 'home' while holding his breath and chanting 'Kabaddi, Kabaddi'.

Pakistan has a deep-rooted connection with kabaddi. It is a traditional Punjabi game. SKL is a significant step taken for the revival of this traditional Punjabi game. Not long ago, Kabaddi was extremely popular among citizens and it was enjoyed by people of all ages alike. But it is a sad reality that in years past, due to the increasing popularity of other sports, Kabaddi lost its significance! Still, Pakistan might have the best kabaddi players in the subcontinent. Even though they don’t get much encouragement to do so, people still like to play kabaddi.

The formal opening ceremony of the league took place at Alhamra Cultural Complex on 1st may. Owners of the teams and various notable artists were presented at the ceremony.  Several artists displayed their performances and it was a night of joy and entertainment. The unsaid theme of the night was patriotism and the tagline of Season 01 is “Damm Hai Tu Saamnaye Aa” (daring other to compete). During the performances the Super Kabaddi League trophy was also unveiled.

How to Optimize Your Content for Google's Featured Snippet Box?

Let’s be fair guys, winning the Google’s featured snippet box is a dream for every SEO person. It gives your website more authority; more visitors, clicks, exposure and above all, it put you on top before the first ranking. You sit on a position zero, so you definitely experience more sales.


However, getting up there is not easy as it seems. The thing is that you cannot mark your page as featured snippet nor there is an official procedure provided by Google to apply for the featured snippet. So, how to get your page up there?
Well the fact is that  while there are no specific guidelines, there are best practices that have proved and deliver results. Google featured snippet box is a form an organic content and can be availed by anybody who knows to optimize their content accordingly. Once you get the things done as per norms, you’ll have to wait and cross your fingers while Google takes it time to crawls on the content.


In this article, we are going to highlight seven best and proven practices to create content pages that can help you win Google featured snippet box.
Several studies reveal that descriptive and long tail keywords tend to boost featured snippets. This is a common observation that when you type more words into the search box, there are high chances that you will see a featured snippet in the result. This clearly indicates that you need to begin with thorough keyword research otherwise you may end up doing a lot of efforts without seeing the actual results.


The key to begin with more of the question-type search investigation and your headings should include words like What, Why, When, How, etc. These keywords are most comfortable to detect. According to a not too long ago article (2015) by Eric Enge at Stone Temple Consulting, almost 19% of searches using a question result in the featured snippet on the first SERP. Generally, these inquiries fall into the following categories:
●        How does
●        Why Does
●        How do
●        How can
●        How to
●        What is
The next thing is to format the content the way Google likes it and the first thing you can do is by making sure that your heading tag is an entire search query. Having that being done, format your content in a user-friendly way and your answers should include.
●        Texts
●        Points
●        Graphs and tables
●        Numbered lists
●        Bullet points
●        Steps
●        Charts
●        Good Images
A Well formatted content may make it less demanding for algorithms to decide if your content is fit for the feature. In addition to that, take the most important part of your content upfront so that visitors get the basic understanding right there.
In the example below, a popular B2B company, FME has got its product featured in the snippet against the keyword, Magento layaway partial payment. FME has briefly described the product in the snippet box which makes it more prone to clicks and sales. 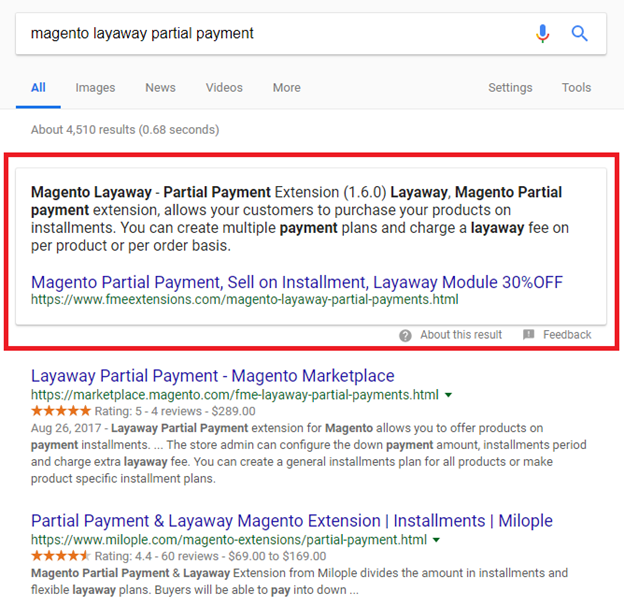 There is absolutely no chance that you win a featured spot without providing the best possible answer to the question. Google’s algorithm is pretty smart and you cannot get away with irrelevant information. Moreover, the content needs to be fresh and updated.
Some marketers try to be over smart and create content pages irrelevant to their niche in an attempt to land on the snippet. This is a totally wrong approach. The best thing is only to focus on few questions first, and with the things, you know.
In order to ensure that your content goes the distance and ranks well in featured snippets across the web, you need to step in the users shoes and understand what exactly he is looking for. Use buyers’ persona research, focus groups and communities and engagement analytics to analyze how to create content that is relevant to your theme and target audience.