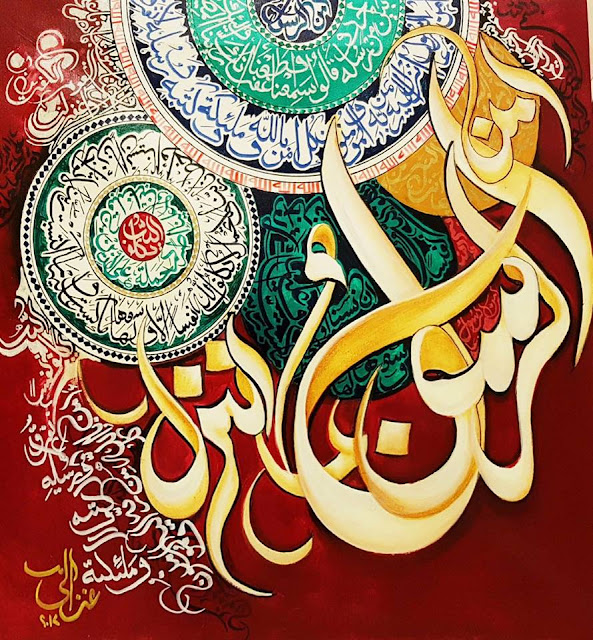 “The beauty of writing is the tongue of the hand and the elegance of thought.”
Hazrat Ali ibn Abi Talib (R.A)

Calligraphy is a centuries-old ornamental decorative handwriting art. It is the art of spiritual world that reveals what’s left unsaid. It is an art of giving expression to letters in skillful and harmonious manner. It is the expression of sentiments instead of speaking. The term calligraphy hails from the Greek civilization. The term is a fusion of two Greek words- Kali and Graphia that means ‘Beautiful’ and ‘To write’ respectively.

The roots of calligraphy are from the Islamic culture, as it was introduced first by the Muslims. In Pakistan now, it is move forward to designs, visual art rather than words. It is highly recognized form of Islamic art as it is originated in the language of Holy Quran. Pakistan being a Muslim state has great potential of Islamic calligraphy as cultural term. Islamic calligraphy is the unique asset of Pakistani culture.
Calligraphy breathes new life into words, stories and even prayers. The ability to turn something as plain as text into something that’s dynamic and eye catching is a fascinating concept. We’re exposed to calligraphy in our society a lot and because we see it so often, sometimes we forget to appreciate its beauty.

Today, we want to introduce you to the man blessed with miracle hands, Asif Ghazali. After getting retired from Pakistan Army, Asif Ghazali began mastering the art of calligraphy which was his life-long passion. Started learning from 2009, Asif finally displayed his amazing creations at an exhibition on 11th May, 2018 in Lahore.  Over 40 Quranic calligraphy pieces curated by him, were put on display. And tell you what? They were the brilliant fusions of mesmerizing color compositions and remarkable artistic skills.

Ghazali has been pursuing this hobby for the last 7 years and he has exhibited his work at different places across not only Pakistan but at USA and Canada as well. Asif Ghazali has an aim of reviving the old Islamic art and calligraphy which are very rich in heritage.

Although in the beginning, the hype of desktop publishing software pushed the bread and butter away from this profession but with the passage of time, people got tired of similar digital fonts and are looking back towards genuineness. Despite the fact that, today a large number of students in different art institutes are learning this art with great interest. There are several artists like him in the country who want to pursue their passion for calligraphy but often deviates from the path due to lack of opportunities. Steps should be taken by the government to preserve and promote calligraphy in Pakistan. The young and struggling artists who have the zeal for calligraphy and wish to pursue their careers in this domain, should be provided platforms as well as adequate resources to showcase their talent.