We all are aware of the names of Sunder Pichai (Google's CEO), Jack Ma (Alibaba's Co-Founder) and Jan Koum (WhatsApp Founder). What they have done is, they achieved a lot, in very short time. Well, that is what the stories about them say. But what were the backgrounds and obstacles they tackled along their path? Let's have a glance at five common things among these three billionaires! 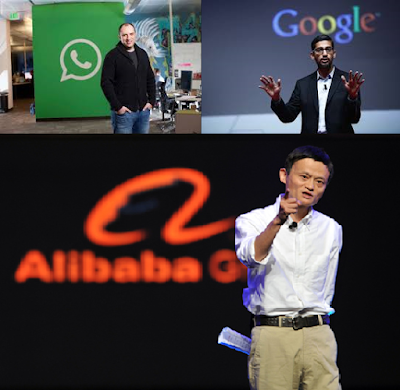 The common most thing they share, is having a rough start during the initial stages. Jack Ma used to guide tourists for 8 years, to finally be able to learn English. Jan Koum, immigrated from Ukraine while he was in his teens to look for a better future in the USA. Pichai's life seems smooth comparatively, but there is lots of effort in his work. He holds degrees in Metallurgical Engineering, MS from Stanford and also MBA from Wharton School of Business.

Jack Ma had no resources at hand, be it money or the technology. Yet his ambition was big enough to provide him the enthusiasm which led to the founding of Alibaba. Jan Koum was an infrastructure engineer at Yahoo and was earning enough to suffice a stable life. But in 2007 quit his job and began working on WhatsApp which he released in 2009.  Sundar Pichai, on the other hand, has been a gifted mind. He has been affiliated with Google since 2003 and was the brains behind the launch of Google Chrome browser, which is now one of the top browsers in the world.

Over the years, the reason for men's jaw-dropping discoveries and inventions is their spirit. God has gifted men with the spirit to keep trying. Jack Ma had no dollar in his pocket but he still had a spirit that provided the Alibaba initial bases to happen to exist. Jan Koum, a college dropout and later an infrastructure engineer at Yahoo. To be honest, he was doing well and fine at his job there. But the urge to bring something new to this world led him to introduce the Messaging app WhatsApp. Sundar Pichai a Tamil Nadu born, who would have thought that he will be one of the most wanted CEOs in the later world.

The key factor in any successful saga is the determination one is attributed with. Whatever you do, being an optimist about your struggle is what keeps you on your toes until you achieve something. Such are the likes of Jan Koum, Jack Ma, and Sundar Pichai. There story revolves around fighting all odds. Not being pushed back by rivals is what keeps you focused on your path.

If it wasn't for the will and foresight that they possessed, achieving such success wouldn't have been possible. Jan Koum, Jack Ma, and Sundar Pichai all had the vision to bring something to bring the change. As a wise man once said, "If you can't bring the change, become the change".

These great individuals had 5 things in common. These things are enough for achieving heights of success. With their will, foresight, intellect, vision, and idea world has evolved in many ways. With their skill, hard work and dedication they became what they are now.