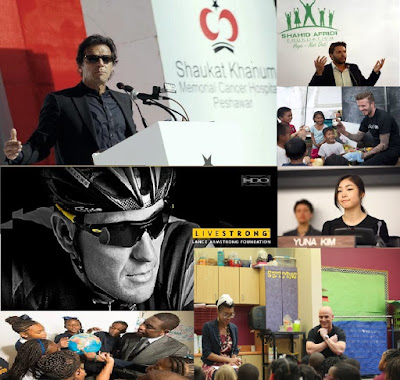 Today most of the athletes make enough money that they could spend a fortune on the things they want and still won't run out of money. Some are busy buying expensive houses, cars while some are humble enough to share what they have with those people who are in need. Some may have founded their own organizations, as many of them are generous with their gigantic salaries.
Here are the 12 sportsmen who have devoted their lives to the purpose of serving others after they retired:
David Beckham:
He works as an ambassador for UNICEF for the Unite Against AIDS Campaign. He also has hi s own charity "Victoria and Beckham Charitable Trust". Beckham has been over the years been supporting many other causes and charities including "Malaria no More", "Peace One Day" are a few of them on the list.
Lance Armstrong:
Lance Armstrong the 7-time tour de France winner is the one to have started one of the most successful charitable foundations. Armstrong pledged to donate $5,000,000 back in the year 2008.
Dikembe Mutumbo:
Former NBA player has been known for his admirable charity work. In 1997, Dikembe Mutombo Foundation was founded with a mission to improve lives of people of Democratic Republic of Congo. He has, since 2001, donated a huge at least $15 million dollars to build a hospital in Kinshasa.
Peyton Manning:
In 1999, he founded PeyBack Foundation. Manning plays an active role since he is the President of the foundation. He is reportedly given $10 Million in grants programs all over the USA.
Tom Brady:
Tom Brady has been supporting charities as such as Entertainment Industry Foundation, KaBOOM!, the Boys & Girls Club of America, and he is best known for Best Buddies International.
Jeff Gordon:
Jeff Gordon founded his own Jeff Gordon Foundation, which is dedicated to helping the children who are fighting cancer. He has also established a children's hospital in North Carolina and has been busy showing support for most of the organizations.
Andre Agassi:
Who isn't aware of the Tennis Great, Andre Agassi? In 2001, in his hometown of Las Vegas, Agassi has founded on his own a tuition-free charitable school for the at-risk youth, which is named after him as the "Andre Agassi Preparatory Academy".Since the year 2007, he has reportedly donated more than $3,000,000.
Eric Lindros:
Lindros bid farewell to Hockey in 2007, and the former NHL star announced to make $5 million donations to London Health Sciences Center in London. For a hockey player, the $5 million dollar amount is too high to spend now.
David Robinson:
He was one of the best centers in the history of basketball he is also very generous with his money. During 1997, he had donated $5 Million to found college academy in San Antonio neighborhood. To Carver Academy, he and his wife had donated $11 Million. He has a heart of gold.
Yuna Kim:
She might be the name on the list least heard unlike the others on the list. But she has just recently retired after 2014 Winter Olympics, and she is the first woman skater to win in Olympic Games, Grand Prix Final, Four Continents Championship, the World Championships. She has been busy serving as the United Nations goodwill ambassador since the year 2010. She had donated her prize money for the earthquake affected, raised her voice for children of Syria.
Imran Khan:
Imran Khan now a politician but he has always been in the news because of his Shaukat Khanum Memorial Trust, as it was his determination that he built one of the best Cancer Hospitals (SKMCH) in the entire South Asian region where those who can't afford cancer treatments are treated free (70% free treatments). Last year he inaugurated the 2nd SKMCH in Peshawar and plans on to build another one in Karachi.
Shahid Afridi:
A mega-star in his country, Shahid Afridi has been regarded as the most charitable celebrity in his home country. He has his own charity organization Shahid Afridi Foundation which is busy working for the medical facilities, education, and helping the poor who are deprived of such facilities.
Share with
Facebook Twitter Google+ Pinterest Linkedin Whatsapp
HMS Khalid   ●   1/07/2017 08:11:00 AM   ●   International Sports
Thought-provoking