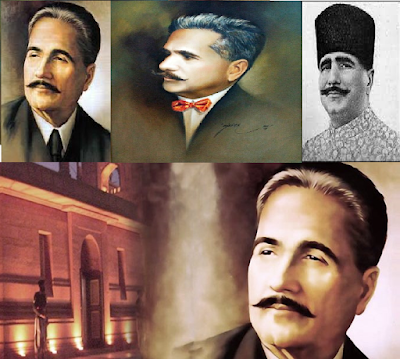 Allama Iqbal, the man whose divinely insight and great vision lead to the creation of Pakistan. He was a poet, philosopher, politician, mystic and Sufi.  He infused the concept of Khudi ( I – am – ness ) into the Muslims. He was always concerned about the miserable conditions of the Indian Muslims and wanted them to fight for their rights instead of falling victim to the situations. He was the originator of the famous Two-Nation Theory that formed the basis for Pakistan.

Let us take a look at 13 amazing facts about Allama Iqbal, that, I am sure will probably stun you!
1. Allama Iqbal Had Three Marriages:
His first marriage was with Karim Bibi in 1895. His second marriage was with Sardar Begum in 1910 And Finally had his third marriage in 1914 with Mukhtar Begum.
2. He was awarded that "Khan Bahadurddin F.S. Jalaluddin" medal in 1897 for  achieving a splendid result in the Arabic language.
3.  A Street is named after him in Germany.
In Heidelberg, Germany a street has been named after Iqbal to immortalize his  stay there.
4. He was bestowed the title of SIR in 1922 by King George.
Iqbal earned for a scholarship University Of Cambridge, Trinity College and earned the degree of Bachelor Of Arts in 1906 and achieved his degree of 'Doctor Of Philosophy' in 1908 from the Ludwig Maximilian University, Munich.
Two titles are attributed with Allama Iqbal that are,
5. After the World War I, he was appalled by the tragic events and disasters Muslims had to face. In order to guide them through his poetry and words, he wrote Khizr e Raah ( The Guide ) and Bang E Dara ( The Caravan Bell ).
6. Persian was Iqbal's preference for poetic expression rather than Urdu.
7.  He was elected to the Punjab Legislative Assembly in 1927.
8. Iqbal accepted the hospitality of Spain, while he was in England. He had the distinction of visiting Cordoba and being the first Muslim to offer the prayer over there after the exile of Moors.
9.  Javed Iqbal, the late senior justice of the Supreme Court Of Pakistan and  recipient of Hilal E Imtiaz Award was born in 1924 to Allama Iqbal and his  2nd  wife, Sardar Begum.
10.  Not known to many, yet the famous 'Taran E Hindi' was written by Iqbal.
Some of the famous books written on Iqbal includes,
Author: The book is regarded as his personal diary. It was started by Iqbal himself back in 1910. Later on, his son, Javed Iqbal finally published it in 1961.