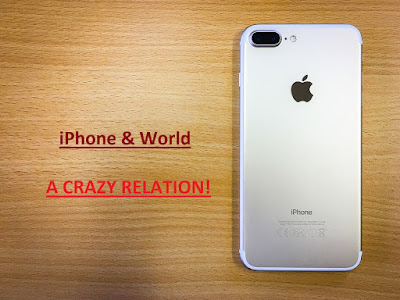 WHY WORLD IS CRAZY ABOUT iPhone 7?

It's 2016, and Apple Inc has just unveiled their latest and greatest Smartphone, the iPhone 7 in mega style. Frankly, who doesn't want to get their hands on the very latest Apple products? The smartest Apple phone has just sought the global attention worldwide as all eyes were set on the release of iPhone 7.

Apart from compulsively buying the iPhone 7, there are various reasons for people going crazy over it. Here we are going to discuss why the fanatics have been in such an awe since the launch of newest edition of iPhone mobile series.
Some key factors that are stand-out and upgraded are:
The one most talked thing, is the removal of headphone jack (which you may already be aware of), better get used to it. In replacement of headphone jacks Apple has upgraded another feature in their mobile phones (stereo speakers) for making the iPhone 7 louder.


Apple has made upgrades with the screen display and to much amaze it's even brighter. As Apple stated:

“More shades of the color spectrum can be used to create an image, meaning that what you see on the screen is a truer representation of the world,”


Coming to the camera, it is no surprise it's giving terrific picture quality results to the users. It also comes out with a telephoto lens which gives your snaps a new, better and real looks to your images.


The Water Resistance? Yes, iPhone 7 is water resistant and being sunk in a pool for 30 minutes won't be ruining your smart, beautiful and expensive handset. No more risks of losing your precious iPhone to a splash short-circuiting the ICs.


Over the years a major issue with iPhones was offering the starting memory storage to be 16GB and users would have had to delete apps or games or other data to create more space for themselves. But now you don't have to be worried about your iPhone's storage space as the new iPhone 7 offers storage up to 32GB as a starting memory offering. Probably the best thing about the current iPhone in offering for their lovers.


In all, iPhone 7 has just a lot to offer once we get to know it we would love quicker processing, brighter screen display, better battery life, good quality images being clicked, high speed processing and a good amount of memory storage to offer as compared to the predecessors. Ultimately, many options have been in the right direction for the latest iPhone. In the beginning you won't see many differences in the predecessor or the newer handset but there are a lot more things you might notice once you get your hands on it.
Share with
Facebook Twitter Google+ Pinterest Linkedin Whatsapp
HMS Khalid   ●   10/09/2016 01:07:00 AM   ●   Informative International
Technology