How Denim appearances and characteristics evolved during last five years ?

As the recent advancement that took place in denim markets, manufacturers are encouraged for manufacturing varieties of denim materials which are then processed for making good quality jeans. The Advancement in the production of jeans took place in the early 1950 and in the year of 1957 around 150 million of jeans were sold across the world. In the making of blue jeans, 100 percent cotton is used and the most common dye that is being used is synthetic indigo.  The manufacturing process is done in different steps and is woven and dyed at one location only. Preparing the cotton yarn comes on top while manufacturing as there are various steps in between when the raw cotton is plugged from the farm and made cotton yarn. The next step is dyeing the yarn that obtained after processing of the ginned cotton and then is slashed which makes the threads stiff and strong. Weaving the yarn comes next and the threads will get processed in those huge mechanical looms and are stitched with blue threads as the denim is not 100 percent blue and has many white patches in it. At this point, the denim is almost ready and can be finished by applying a variety of treatments which includes brushing to remove loose threads from the denim. 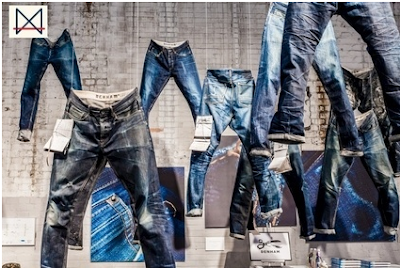 The quality of the denim that is used in making jeans is very much important and strength of the material along with its weight is calculated and the strongest amongst them with low weight is considered a good quality material.

1. 3D weaving is a whole new concept in weaving where three-dimensional denotes length, breadth and height of woven fabric. The thickness is the most important thing as multiple layers are formed using multiple series of warp and weft which helps to increase the thickness and thus recently found a great success in the field of medical and weaving of vascular prosthesis is the area of specialization.

2. Air-Jet Loom is a loom in which weft is being propelled by the means of jet air through the shed.

3. Light Scraper is a third generation laser technology that will be fully automated and efficient along with ethical and ecological production without losing the way garments looks naturally.

4. G2 dynamic ozone technology is the technology that helps in bleaching of jeans without using any sort of chemical substance which was not adopted by many till 2005 and is only used in 5% of production.

5. E-flow is the biggest amongst all which states that using water in the manufacturing industry was pre-historic. What this technology does is it converts the air from the atmosphere into nanobubbles as chemicals and water distribute themselves, forming nanobubbles skin due to distribution. As it acts a carrier that transmits the chemical that contains the nanobubbles into the fabric in more efficient and optimal way thus uses minimal water.

Do you know the top Denim brands of the world ?

Due to this recent advancement in the technologies work has got easier and the use of labour to make the material and then processing it to make a jeans has reduced considerably. Thus only the installation charges of the various technologies will be a concern for the manufacturer.