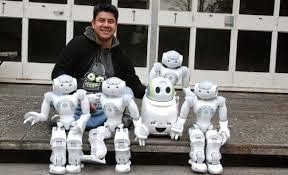 IKRAM, a ROBOT has predicted that Afghanistan will win the world cup cricket 2015. This robot has been invented by Eduardo who is the PHD student at University of Canterbury in New Zealand.  Fourteen teams from around the world are taking part in this battle. According to the report, when the flags of all the teams had been shown to IKRAM, he first narrowed down his selection with the flag of India, Scotland, West Indies, New Zealand and Afghanistan and then finally made a decision that Afghanistan will win the world cup. Although it seems impossible because Afghanistan has to compete with the giant best teams of this game but according to Eduardo that Cricket is an unpredictable game in which anything can happen at any stage of the game so just ignoring the IKRAM’s prediction may not be decisive.

He further added that name “IKRAM” has been suggested for this robot in regard of Mexican-Syrian philosopher. Eduardo said that he was inspired with Paul Octopus whose predictions in the Football world cup 2010 was quite successful and it was actually the source of inspiration for him which caused the invention of this robot.

Despite the facts which Eduardo mentioned in his statements and how true these predictions would be in this world cup?,  we need to wait so far but one point which is looking quite clear here that IKRAM selected the winner based on the country name which was on top alphabetically as Afghanistan starts with “AF” so it will be on top always with this science, our advice for the inventor to please recheck the science behind this selection criteria of IKRAM because it is the very possibility that  software which is working behind this robot, may always work like this whenever IKRAM predicts the winner of every single match.